​I receive a lot of questions as to the name of my 33’ Chris Craft Commander, Scheherazad (pronounced  shə-her-ə-zäd) . Here is her story:

On her first extended shakedown cruise under my ownership, my Dad and I piloted the vessel, then named “Down Under”, from St. Clair Shores Michigan to Put-in-Bay Ohio on South Bass Island in Lake Erie. The trip through Lake St. Clair and the Detroit River was relatively smooth and inconsequential. However, the winds were building throughout the day and hit us hard as we exited the river and rounded the Detroit Light with our easterly heading to the island. By now the wind was out of the Northeast and howling at over 30 knots. This made headway to the island quite dicey, at best. As we were battered in 6 – 8 foot seas, I learned first hand the meaning of the word “shakedown”.

In the midst of our tumultuaous journey, my Dad imparted a tale of the B-17 in which his brother George spent his time while in WWII. The name of the gunship was Scheherazade. I had heard the name, but was not familiar with the story. Here’s how is goes:

Scheherazade was a Persian queen and storyteller of One Thousand and One Nights. The tale goes that every day the King would marry a new virgin, and every day he would send yesterday's wife to be beheaded. This was done in anger, having found out that his first wife was betraying him. He had killed three thousand such women by the time he was introduced to Scheherazade, his advisor’s daughter.
In an effort to save the life of her sister, who was next in line, and against her father's protestations, Scheherazade volunteered to spend one night with the King. Once in the King's chambers, Scheherazade began to tell a story during the long night. The King lay awake and listened with awe as spun her tale. The night whiled away, and Scheherazade stopped in the middle of the story. The King asked her to finish, but Scheherazade said there was not time, as dawn was breaking. So, the King spared her life for one day to finish the story the next night. So the next night, Scheherazade finished the story, and then began a second, even more exciting tale which she again stopped halfway through, at dawn. So the King again spared her life for one day to finish the second story.
And so the King kept Scheherazade alive day by day, as he eagerly anticipated the finishing of last night's story. At the end of one thousand and one nights, and one thousand stories, Scheherazade told the King that she had no more tales to tell him. During these one thousand and one nights, the King had fallen in love with Scheherazade, and had had three sons with her. So, having been made a wiser and kinder man by Scheherazade and her tales, he spared her life, and made her his Queen.
The crew of the B-17 decided that it would be fitting to name their plane after Scheherazade, as they too wanted to live “just one more day”. This B-17 and all the crews who flew in her successfully completed all of her missions, and was retired to Arizona after the War.
At that time, I vowed to my Dad that should we make the trip and safely return back to our home port, I would change the name of the boat to “Scheherazade” to honor of my uncle and his brothers-in-arms, as well as to celebrate our accomplishment of completing a successful trip.
We made it to Put-in-Bay, affected necessary repairs, and had a great weekend. The return trip was wonderful. When the boat was hauled out at the end of the season, the old name was removed, and the following season she was relaunched as “Scheherazad”.  Note: the last “e” in her name is missing on the boat, as all early photos that I received and found doing research had a crew member standing in front of it. I think that it gives her more character.
Each trip out is a continued celebration and honor of the memory of those brave men and all of the crews that served in WWII. 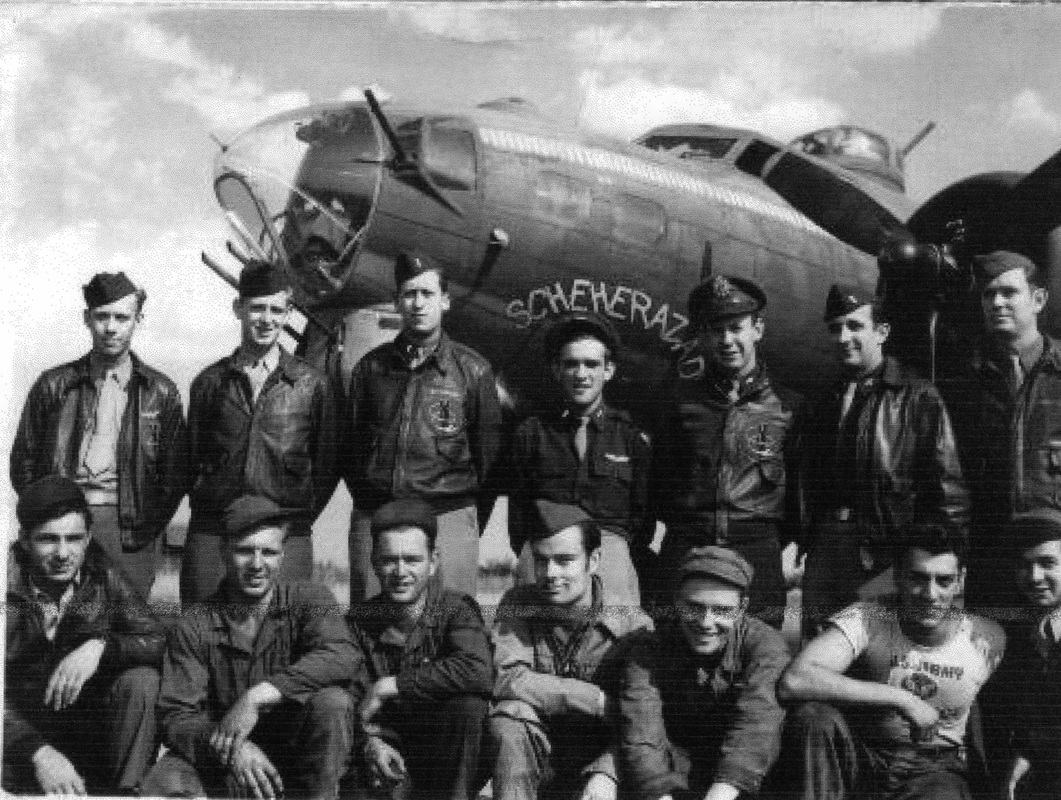